The Lost Art of Leisure


I've spent my long, four-day Memorial Day weekend being anything but productive. I didn't paint the new pantry cabinet shelves and doors as I had planned. I didn't go to parties, or swimming, or shopping, or out to eat. I didn't plant tomatoes and peppers, or garden, or prune the shrubs as I had planned (thanks to overactive pollen allergies and extreme heat). In fact, we've barely left the house.

Instead I've read, watched movies, surfed the net too much, slept quite a lot and enjoyed several great meals. I did clean, because I find it much easier to relax in a clean house, and did laundry. I don't know if it's the fact that I've been going on overload, or if I'm just being lazy, but either way I couldn't be happier with having four whole days to relax.

Sometimes it seems like we've completely forgotten how to relax, to enjoy life, to just be rather than constantly doing something.

We value more, bigger, better, faster. The internet, TV, magazines--media of all types--are full of tips on how to be more productive and fit more into already busy schedules. We reward workaholics and take fewer vacation days than ever even though we aren't granted many to begin with. It seems as if there is always something productive we should be doing with our time.

Why must we fill every moment of every day being productive, making money or getting things done? We have to realize that there will always be more work; there is no finish line for the jobs of today. Eventually you have to let it go, make time to enjoy life, relax and recharge.

We've all heard the cliche that no one ever wished they had spent more time working on their deathbed. What is the point of working so hard if you never get a moment to enjoy it? If you haven't already, take a moment to just enjoy your life. Quick, before the holiday weekend ends!
Posted by min hus at 1:17 PM 6 comments:

Email ThisBlogThis!Share to TwitterShare to FacebookShare to Pinterest
Labels: simplify

Getting Cat Pee Out of Laundry 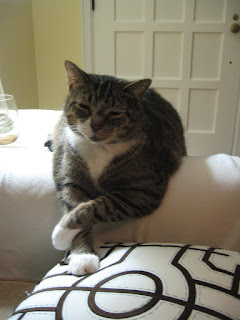 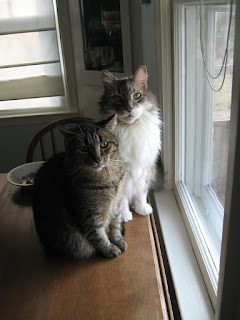 I know it's hard to believe that one of these little angels (har har) would pee on laundry, but once in awhile, especially as two of them have reached their mid-teens, it has happened. The good part is that so far it has happened in the part of the basement that just has a cement floor, so the only casualty thus far has been laundry.

In the latest incident, a drop cloth, my favorite bathroom rug, and some towels were the victims. The drop cloth was immediately trashed, but I wanted to at least try and save the rest. In the past, the boy has tried washing pee-soaked laundry several times in a row to now avail. Obviously I needed to take a new approach, so I turned to the all-knowing Google.

As always happens when one consults Google, I found varying opinions. Some said vinegar would work, others said if the urine was dried (as it was in this case) the only chance was using an enzyme cleaner, and even that might fail. I decided to try using things I have on hand, which worked perfectly.

Email ThisBlogThis!Share to TwitterShare to FacebookShare to Pinterest
Labels: cleaning, lessons learned, this and that

Wow, it's been awhile since I reported on the pantry progress. We're coming towards the finish line now, but I'm going to catch the blog up. When we last left the pantry, it's bare bones were up.

Next the boyfriend made doors that are a pretty exact match to the rest of the 1950s kitchen cabinets. 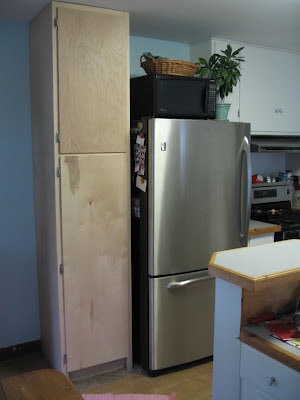 It's already looking so good, but we have many more plans to come!

Finding Peace in the Chaos

The last couple of weeks at work have been insanely busy, and sometimes stressful, hence the neglected blog. The sad thing is that I am entirely to blame for my work life going from a manageable 40 hours a week to a hectic 45+. And I really miss those five extra hours or more of my free time.

What happened? Well, I accepted a temporary position doing the job a level above mine....in addition to keeping my own full-time job. How is this possible, you might be wondering, for the blogger who wrote this post about being satisfied not climbing the career ladder and in fact wants to work less? It's a question I've been asking myself ever since.

I guess I was flattered that out of several people, I was asked first to take over a fairly critical function for the next several months. It would also give me a chance to see what having this position would really be like, as well as what working in our parent organization would feel like. And the work is more interesting than what I'm dealing with in my regular job right now, but like I mentioned I have to do that too. But the whole situation is also one big unorganized mess.

I considered this carefully before saying yes, talked to a lot of people I trust, then eventually decided to take the plunge. And ever since I've been scrambling to keep my head above water and trying not to panic.

At first I was fine working the nine and ten hour action packed days. I think I was feeding off of adrenaline. But that has worn off and I'm already getting tired after just a few weeks, so how will I stand it for a few more months? I started feeling pretty sorry for myself around mid-week, but last night I decided that I got myself into this mess and now I have to deal with it. I can't wish my way out of this one. And you know what? That mind set plus a few other tricks seem to be working.

Here's how I plan to survive the chaos:
Do you have any tips to add? How do you handle being overwhelmed at work?
Posted by min hus at 7:39 PM 6 comments:

Email ThisBlogThis!Share to TwitterShare to FacebookShare to Pinterest
Labels: simplify

How long could you live without spending any money? I'm not talking about just avoiding the stores on the way home from work, but also not flipping the light switch (which, unless you generate your own electricity,  generates a bill you eventually have to pay), turning on the water, or subscribing to the paper. In The Moneyless Man: A Year of Freeconomic Living, Mark Boyle attempts to live for any entire year without spending a cent.

I'll be honest, although I was curious about this book, I didn't expect to enjoy it. That may sound pessimistic, and I suppose it was, but I expected it to be so chock full of mooching, cheating and whining that I would be instantly turned off. Which couldn't be farther from the truth. I was surprised at just how well-written and amusing this book is. It was a book I looked forward to reading each night and finished rather quickly, which is really saying something when it comes to me and a nonfiction book.

Why would I bother to reserve a book from the library that I fully expected to be crap? Curiosity, of course. I can't imagine spending a single day without money, let alone a whole year. I'm still not sure that getting rid of money is the way to get us out of our current economic and environmental mess, although Boyle makes some interesting arguments about the viability of doing so. One argument I can't quite buy, is that if we give help freely whenever someone needs it, be it food or labor, then the community will provide for us when we have a need. I just can't trust society and the goodness of others that much.

Boyle makes the point that if we were responsible for producing everything we need ourselves, rather than simply purchasing it, we wouldn't waste things as we do now. We would also probably consumer things quite differently. I  know full well that if I had to raise and kill the animals I eat, I would  probably quickly become a vegetarian. Similarly, if we had to carry our own water, rather than turn on a faucet, or generate our own electricity, we would certainly stop wasting so much of it.

Boyle's experiment of living for a year without money is certainly interesting to read about but it's not something I would want to attempt. For one thing, living without money may indeed make for a simple life, but it's not an easy one. Boyle had a long, hard workweek, he just traded working for wages with working to survive. I desire more free time to spend as I choose, so spending all day doing chores doesn't strike me as better than spending 40 hours a week working outside the home. Puttering around the homestead, sure, but Boyle didn't have much time to putter when he had to feed, clothe and shelter himself without the use of most modern conveniences. No thanks. Could you use an outside compost toilet and shower year-round in a non-tropical climate like Britain? I rest my case.

Boyle, however, obviously feels differently, since he has continued to live without money long past his yearlong experiment was over. If interested, you can learn much more about Boyle from his website, Facebook page, and numerous online articles and videos about him.

The Moneyless Man is definitely a book I recommend reading and give it 4.5/5.0.