I'm not big on setting new year resolutions, but I do often pick an area of my life that I want to focus on and improve. This year, I'm focusing on eating healthier.

This is a big challenge for me because I've never loved cooking and for the last few years I've barely cooked at all. Not that we eat out every night, mainly on weekends, but I've been living on salad, pita and hummus, canned soup, frozen pizzas and frozen dinners for far too long. Because I eat veggies and fruit pretty much every day, I always thought I ate pretty healthy. In reality, however, my diet was far from it and I was ready for a change.

I've been eating pretty simple meals. A lot of roasted veggies, including sweet potatoes, broccoli and green beans with couscous or quinoa. Grilled chicken wraps with lots of veggies. A few stir frys. And of course my salad, pita and hummus habit, while reduced, is still going as it's quick, easy and is real food.


This has been a big change and yummy though it's been, it hasn't been easy. Even with sticking to simple meals, cooking and then cleaning up most week nights takes up an hour or more of my free time after work.

I'm also taking a "small changes are better than nothing" approach, which is a challenge for this perfectionist. I'm aiming for real food 80% of the time, but I'm not there yet. Still, there has definitely been progress. 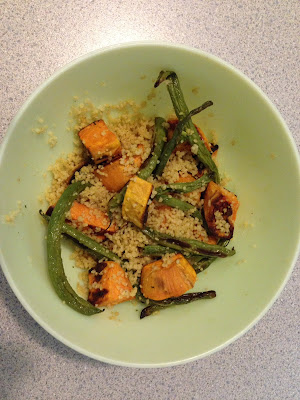 I'll also admit that I was hoping that if I switched to a real-food diet the extra pounds would just start melting off and, sadly, that hasn't been the case. I've been losing and then gaining the same 3-4 pounds since the beginning of the year ad not really making progress. Maybe it's because I'm not following the plan strictly. Time will tell.

Is anyone else trying to eat healthier these days? Any challenges or recipes to share?
Posted by min hus at 5:44 PM 11 comments:

Email ThisBlogThis!Share to TwitterShare to FacebookShare to Pinterest
Labels: eating healthy, this and that
Newer Posts Older Posts Home
Subscribe to: Posts (Atom)