This post on Small Notebook inspired me to attack one of our clutter hot spots: the cabinet under the kitchen sink. Go ahead and go check it out, I'll wait. Have you ever seen such a sparse under-the-sink area? I haven't.

My own under-the-sink cabinet is just slightly more cluttered. 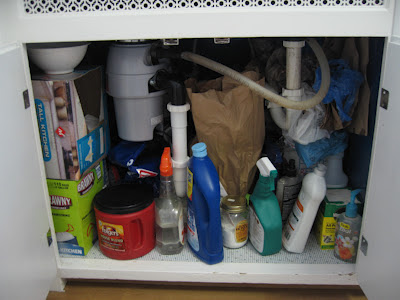 Despite what it may have looked like, the sink was mostly cluttered with bags, dirty cleaning cloths and a few items that belong in the basement. Once I cleared out those items, and did a quick cleaning of the crumbs and whatnot, it looked much better. 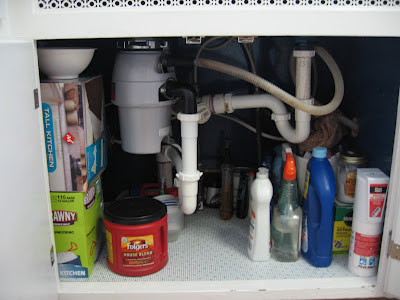 Voila! Although my cabinet will never be as empty as the one featured on Small Notebook, it looks much better with empty space and organized items. Now it makes me happy every time I open the cabinet.

What are your clutter hot spots and when did you last attack them?

This week I am on a staycation, aka a sanity break from work. And what exciting activity did I have planned for my first, long-awaited vacation day? I went to the dentist, cause I know how to par-tay.


If you're thinking that I must feel differently about going to the dentist than the majority of the population, never fear. I hate the dentist just a much as the next person. Now though, my hatred has muted from the normal childhood fear of hating the dentist for fear of cavities, to absolutely loathing the forced interaction with whichever hygienist is stuck scraping my teeth this visit.

Is dental hygiene a popular career for people who can't get into law school? Because I seem to be grilled about my oral hygiene habits on each visit by an over-eager hygienist who acts like she's a prosecuting attorney hell-bent on discrediting a witness during cross-examination. I will freely admit that I am not perfect in the mouthcare department. There are times I fall asleep reading before I brush my teeth at night. And while I floss fairly-religiously on week days, my weekend routine leaves a little to be desired (you should see my hair!).

Hygienist the Hun (aka HH): How often do you floss?

Me: Five days a week or so.

HH (looks gleeful): Do you have floss threaders?! (I can practically see her thinking 'A-ha! I have you now you nasty-non-brushing-disgusting-non-flosser! Because without them, there would be no way I could properly floss several teeth)

She then went on to explain about how my permanent retainer is attached to my teeth and how I should properly floss around it. At this point I should have probably asked for a mirror so I could see just how terrible a job I had done because the permanent retainer I've had since I was 13? Um, yeah, we've met. I've been flossing that bitch for 20 years now, so I don't need a lecture on how to do it. But that wasn't all, I also got asked how I brush, instructions on how to brush properly since she suspected I completely missed my gums (again, no, last time I checked I'm neither 2 nor mentally challenged.). Then as I was leaving she gave me a package of said disputed floss threaders, "just to be sure I have plenty." WTF?

Oh, and when the dentist came, despite the hygienist's lectures and the stern warnings about "needing Doc to look at tooth #20, something is going on there!" the dentist said everything looked great. She also welcomed me to the "cavity free club" for another six months. High five, yo!

Now, I'm tempted to ask anyone who might still be reading if I'm the only one who gets the riot act from their dental hygienist, but I had a nice long run there with actual human beings who didn't treat all the patients like naughty kindergartners. But then that dentist sold the practice and moved. Jerk.

The other thing I hate about the dentist is the hard sell. Do you use Sensodyne Sensitive toothpaste? Not just sensitive toothpaste mind you, but this brand! Well, you should. Here, try some Listerine Zero with fluoride! We want you to start using this every night. Plus, the fluoride treatment hard sell by every single employee I came into contact with. And don't forget, we have the best prices in town on electric toothbrushes, they will change your life! It wasn't bad enough I had to hear the chick give the patient next door the same spiels, I got my own as well. So instead I say no, no, no and probably have a rep as surliest patient of the year.


I can't help it really. When I was a kid I went to an ancient dentist who was well past retirement age. His equipment was even older. He didn't have TVs to distract you. For entertainment I counted his ample nose hairs and tried to decipher if his hems and haws meant the drill was imminent or not. There wasn't a fancy suction tube, you spit in the sink next to the chair and watched it float down the drain. Dear god, do I miss that spit sink. My dentist didn't crack a smile until the very end when he declared me cavity-free and let me pick out a sucker before I skee-dattled the heck out of there. And he most certainly didn't load us with a goodie bag of unnecessary toothbrushes and miniature floss packages and a fricken envelope of floss threaders. And WE LIKED IT!

Ahem, sorry. I got a little sidetracked there. Where was I? Oh yes. Fluoride.

The fluoride thing is always a conundrum for me. Do ya'll go for the fluoride? I'm not sure where I stand on the whole fluoride thing, but, when in doubt, I try to stay away uncritical chemicals. I tried researching it a year or so ago, but found as much literature for as against. So in the meantime I abstain from the extra treatment, but still use toothpaste and other products with fluoride. Although maybe I should rethink that since when I was a kid they made use rinse with fluoride in school and I never had a cavity until my late teens.

Seriously though, am I the only one who has this much fun at the dentist?
Posted by min hus at 9:09 PM 10 comments:

This is week eight of the Your Money or Your Life Online Book Club, where we are tackling the nine steps of the YMOYL program. Get more background info. and a complete list of the steps here.

First, please accept my apologies for the long, unexpected hiatus from this weekly book club. Life trumped blogging for so long, that I thought it was pointless to continue, at least until one of you inquired about it and I thought, might as well finish eh? So, on with the show.

Step 8: Capital and the Crossover Point

Each month, apply the following formula to your total accumulated capital and record the result on your wall chart:


After you begin investing your money, start entering your actual interest income on your wall chart. After trends become clear, project that line to the crossover point; you will then have an estimate of how much time you will have to work before reaching financial independence.

I have to admit, I've totally fallen off the YMOYL wagon. Being in the midst of several home improvement projects made tracking every expense cumbersome and depressing. These are definitely not typical spending months.


What about the rest of you? Are you still tracking every expense? Are you updating your wall chart regularly? If so, do you find that worthwhile?
Posted by min hus at 10:13 AM 10 comments:

One of the key tenets to green and simple living it to take care of the items you own. Unfortunately, I have a low repair tolerance. When something breaks, my first instinct is to worry how much a new one is going to cost.

I've made progress, however. Now when something breaks my first instinct is to ask the boyfriend if he can fix it. And if he can't, well, then I move on to, "Oh great, now I have to buy another one." Baby steps.

Luckily for me the boyfriend is handy. He's fixed more things than I can remember around here, saving me boatloads of money and stress. Plumbing, mowers, cars, holes in floors, even the washer were no match for The Boy. The last washer repair was quite impressive. He replaced the belt and pump and it's working like a champ again. I was sure it was a goner. He even blogged about it in case anyone out there has to make the same repair. 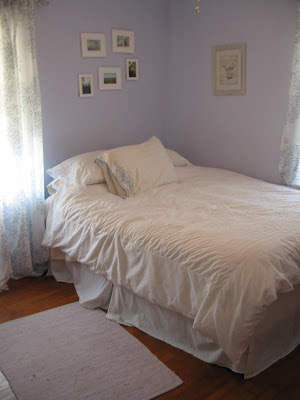 Being able to repair your own stuff not only saves money and helps the environment, it's a major confidence booster as well. Today I managed to save my duvet cover from an early death all by myself! (cue my 'I'm a big girl now' smile).

I noticed my comforter had a rip in it the other day, one that my go-to solution (iron-on fabric tape) could not repair. The final nail in the coffin was an unsightly staining incident (gotta love cats!). I was pretty sure that if I tossed it in the washer without repairing the rip things would only get worse. My first thought, of course, was to go to IKEA and pick up another since it's not an expensive cover. But something came over me and I decided to try and salvage it instead. Now, I'm not exactly known for my sewing skills. The last time I sewed something other than a button was in my junior high home economics class. Still, I managed to repair the (admittedly small) rip by hand, and, surprisingly, it doesn't even look half bad! Then I attacked it with some Shout stain remover (I'm sure Shout is toxic as hell, but it has impressed us to no end with the stains it has removed from fabric) and washed it and voila, it's almost like new again.

What's the last item you saved from the dump by repairing it?
Posted by min hus at 6:34 PM 17 comments:

We had a great weekend. The weather was amazingly perfect. Last weekend it was sufferingly hot, in the 90s with high humidity and high pollen. I was miserable and hid out inside in the AC all weekend.

This weekend was the complete opposite. Highs in the 70s, low 80s tops, low humidity and a much more forgiving pollen count. In June no less! No AC was needed, and the windows have been open all weekend. It's even been cool enough in the evenings to require snuggling in a blanket. In short, it was perfection. And we definitely took advantage of it. 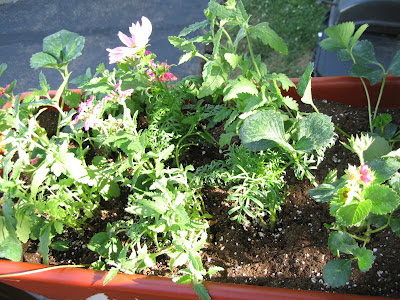 We finally planted our summer vegetables, three kinds of peppers (Habanaro, Jalapeno, and Cayenne) for the boy and three kinds of tomatoes (Early Girl, Golden Girl, and Patio) for me. I also planted a ton of flowers and a flat of strawberries. I finally slapped a coat of primer on the pantry doors, and we took a long bike ride today, 15.7 miles!


There was also plenty of time for R&R on the deck, and a Sunday nap.

If only the weather would stay this perfect all summer.

How was your weekend? 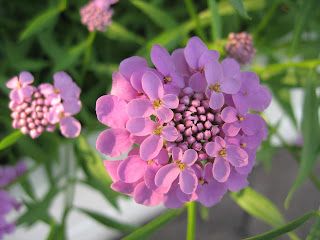 p.s. Can anyone identify this flower for me? I planted Sweet Alyssum seeds but this is a giant compared to any other Alyssum I've seen.
Posted by min hus at 4:51 PM 3 comments:

Email ThisBlogThis!Share to TwitterShare to FacebookShare to Pinterest
Labels: garden, this and that
Newer Posts Older Posts Home
Subscribe to: Posts (Atom)