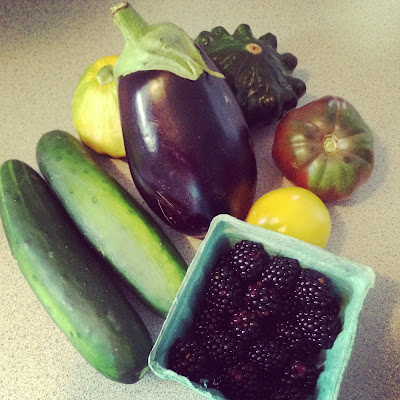 The weather was perfect for our mid-week farmer's market, and I picked up some tasty
heirloom tomatoes, among other things. Oh, and roasted eggplant with garlic is now my favorite. 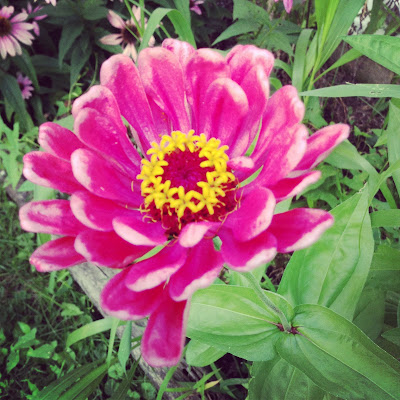 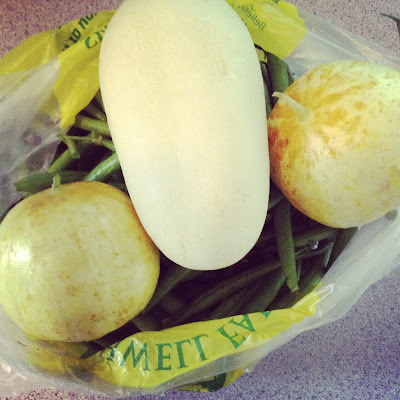 It was raining during Saturday's farmer's market, but I saw a picture of
these heirloom cucumbers and for sale and I had to have them. 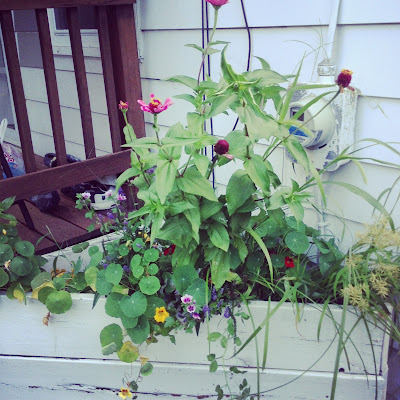 I love the way this recycled planter turned out this year. It's bursting with
zinnias, Veronica Speedwell, nasturiums and mallow. 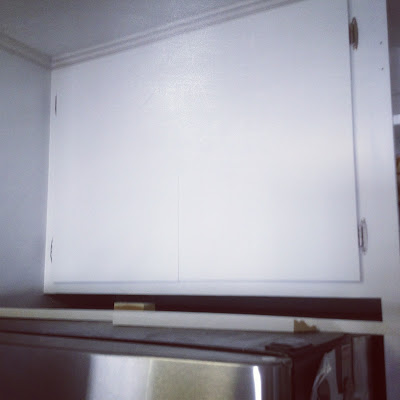 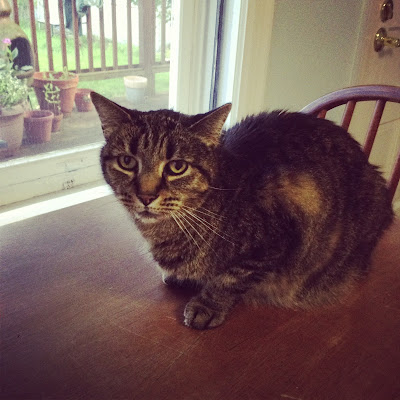 And Mikko is still doing amazingly well despite a serious heart condition, thanks to his medications (knock on wood, cause I'm superstitious). He doesn't love taking them, and I don't love making him do so, but we manage.

Plus the weather has been lovely. I've had the AC off for two whole days,
quite amazing for late July in these parts.

How are things for you?
Posted by min hus at 5:14 PM No comments:

Do You Declutter to De-stress?

Thanks to the fourth of July holiday, I had a lovely four-day weekend with plenty of time to squeeze in some DIY project work. But alas, it's been raining for two straight weeks, so while people out west might kill for a little rain, it put a damper on doing the one project around here that really needs to be done, namely, the cabinet painting project (no mom, it's still not done yet).

But what the rain taketh, the rain also giveth back in the form of time to work on a project that sounds a little bit fun and an excuse to avoid something I should do, but don't wanna (hello cabinets!). I decided this weekend was a perfect time to engage in a little therapeutic decluttering.

I know I'm not the only one who derives a sick sense of satisfaction from decluttering and organizing, especially when I'm super stressed. So after watching an episode or two of Consumed online for inspiration (which my fellow Americans can enjoy via YouTube despite HGTV Canada's non-sharing), I decided to tackle my closet. Again. I don't even buy that many clothes, certainly not in comparison to the average Western woman, and yet my closet continues to attract clutter. Actually, it was kind of fun to have stuff to purge again, since I haven't been in the mood to declutter much lately.

After the closet I moved on to my makeup drawer, another major clutter area and turned it back into a manageable storage spot.

In the end I filled another sack, plus a duvet, for the charity shop, which I packed up and dropped off on Sunday.

And it still feels so good.

Now I just need to figure out how to keep these spaces uncluttered.

What have you decluttered lately?
Posted by min hus at 5:57 PM 2 comments:


I'm sitting on my couch having a beer at 4:00 pm on a Friday to try and chill out after taking the cat to the vet.

This summer has not turned out as I expected, to put it mildly. After spending more time than I wanted to working 1.25 jobs last summer, I vowed this summer would be different. I would garden more, have more fun and work less.

As it turns out, I'm working more than ever before. I haven't planted a single vegetable and my kitty got sick.

Yet we're surviving, and even under less than ideal circumstances, we are grabbing every moment of possible happiness.

It started when I got a new job...same company, same job function, but in a new department with a lot more responsibilities. It's a great opportunity with more interesting projects, but I've never been so challenged or worked so hard in my life.

Then the week before I started my new job, my littlest and youngest kitty (at 14 he's hardly young but...) was having problems breathing. I took him to the vet who found that he was in congestive heart failure. The vet gave me two choices: take him to the emergency vet immediately, or put him to sleep.

We took him to the emergency vet and long story short, he has advanced heart disease. But way too many vet bills later, he's doing pretty well on a regime of six pills a day. In fact, if you didn't know he was sick I don't think you'd guess it.  He's still the most active cat in our household, and eats, plays and patrols the windows as much as ever. Now I know that this could change any day though, so I'm doing my best to enjoy him while I can. 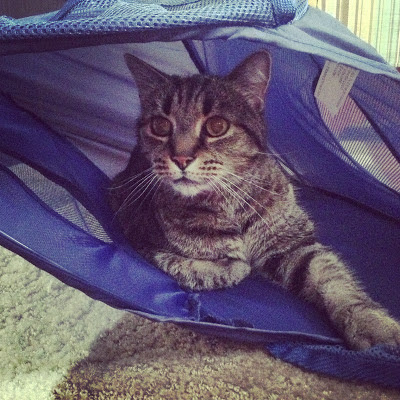 With all the stress I've been under this summer, my natural inclination is to freak out, feel sorry for myself, and retreat into sadness. And though I've had those moments, there have also been some really good moments that break through the despair:


The kitchen reno may not be going as quickly as I'd like, I may not have tomatoes growing out back and my house may be messier than usual this summer, but in the end, none of that really matters, now does it?

What are you grateful for?