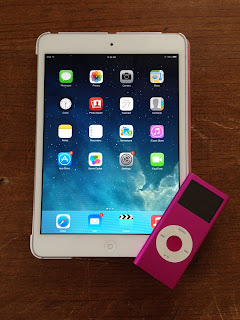 Of all of our consumerist, capitalist sins now wrecking havoc on the planet, planned obsolescence is possibly the worst. Or the most irritating at least.

Defined as designing a product with a purposefully limited useful life, planned obsolescence seems to be a hallmark of modern life.

Rather than frequently upgrade to the newest and best, I prefer to hold on to things. My car is 15 years old. My bedroom furniture was purchased when I was a teenager. Having older things doesn't feel like a hardship--I rarely crave the newest and best. Plus, keeping things for as long as possible is not only good for the planet, it's also great for your wallet.

When making a larger purchase, I take my time, do extensive research and buy carefully. It's a time-consuming process that I prefer to repeat as little as possible. This is especially true for electronics.

My mp3 player is an 8-year-old second generation iPod nano that only shows a white square on the screen. But it still works just fine and 95 percent of the time I use it in my car and control it via the stereo anyway. The living room TV is a hand-me-down from the boyfriend's last upgrade with some dead pixels at the top, but most of the time I forget they're even there.

My smartphone (my first and only that I was given last year) is a hand-me-down iPhone 5 that I'll use until it dies. I keep my computers until well-past using them becomes inconvenient.

But planned obsolescence makes it increasingly difficult to keep possessions for long, especially in the case of electronics. Apple seems to be especially bad at this with their frequent operating system updates that don't always work well on older devices. I experienced this recently when my Feedly app on my ipad mini updated to an iOS 9 compatible version that crashed immediately after launch. I'm still using iOS 7 because of reports that the new software renders older ipads so slow that they're virtually unusable. I tried all my usual tricks of rebooting the ipad, re-downloading the app, etc. to no avail.

In case you're thinking, so what, it's just one app, Feedly is a news aggregator that makes it quick and simple for me to read dozens of blogs and websites that I follow from multiple devices and the web. While not the only aggregator out there, for me it's by far the best and my most used app. And while it still worked on my phone and laptop, I prefer surfing on my ipad as it's far easier to read than my phone screen while still being much more comfortable to use than the laptop.

After two days of complaining about my Feedly-less life. my boyfriend suggested that I might just have to buy a new ipad mini so I can use my favorite apps since it's something I use so often and enjoy.

While he has a point on one hand, it seems almost criminal to have to spend $400 or more for a new device when the old one still functions perfectly well except for some software issues. The miser in me was very unpleased with this idea.

Luckily it didn't come to that as I was able to revert to an earlier version of the app using these instructions and all was well again. Although I know it's only a matter of time until more issues crop up.

What about you? Are you a serial upgrader who prefers the latest and greatest? Has planned obsolescence caused any issues for you?
Posted by min hus at 9:45 AM 3 comments: