Review: 7: An Experimental Mutiny Against Excess 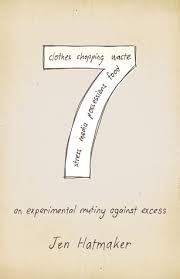 I was surprised when I picked up Jen Hatmaker's 7: An Experimental Mutiny Against Excess from the hold shelf at the library. Surprised, that is, that I requested it in the first place. If you check out the other reviews I've done you'll see that the idea certainly fits within my usual genre of interest. The basic idea is that in order to simplify her life after being called rich by a poor young hurricane victim who is staying in her  home, Hatmaker decided to simplify seven areas of her life. She resolves to spend one month on each of the areas--food, clothes, spending, media, possessions, waste and stress--boiling it down to the number seven by only eating seven foods, wear seven articles of clothing, spend money in seven places, etc.

My first problem with the book, and the reason I was surprised that I picked it up in the first place, is that religion is very front and center throughout the book. Since I'm not religious, this is a turnoff. I can't say this was hidden, however, if I'd clicked on "read more" in the Amazon description, or even read a bit about the author, who is active in the running of some new-agey church in Austin and is on the Christian author/speaker circuit. In other words, I should known, but I missed that little snippet.

Intrigued by the book's premise, I decided to read it anyway. And if you're a heathen like me who is turned off by a bunch of religious talk, let me warn you, it's sprinkled pretty liberally throughout the book as Hatmaker views her foray into simplicity as a way to get closer to God. There were several paragraphs and pages I skimmed right over cause, no offense to the believers out there, that stuff resonates with me about as much as tales of Santy Claus. Once you get past the first chapter or two though it does die down a bit.

The second problem, however, invades the entire book, and that's the core concept itself. Sure, it's intriguing to read about someone choosing to simplify their life by sticking to a severe limit, in this case, eating the same seven foods, wearing the same seven items of clothing (stick that in your craw you less-than-100-thing- wannabes). Could you do that? Could I? But more importantly, why bother? Because in the end it just feels like a giant gimmick, ahem, another giant gimmick, for a book that doesn't make a whole lot of sense in reality. Let's face it, the simplicity genre does love a good gimmick, and a lot of the books I've read employ them. Though, in retrospect those are the books I tend to enjoy least with the exclusion of the Moneyless Man, but the whole gimmick for a book thing isn't really working for me anymore. What does sticking to seven foods really teach someone that sticking to a budget limit, or a healthy-eating plan, etc, would not? In fact the latter ideas seem more edifying to me, but to each their own. And wearing only seven items of clothing? Well that was just silly really, especially where she shuns wearing a coat during a freak Texas cold snap because it's not on the list, and instead complains frequently about it. Just go get your freaking coat already!

It's not all bad of course. Hatmaker is a good and humorous writer. She manages to make even telling the mundane details of the book entertaining, and unlike some simplicity books I've read, the quality of her writing only enhances the tale. While any way of spreading the simplicity message is a good thing to me if it resonates with readers, this one just didn't resonate with me. Sadly, I can't say Hatmaker's book has inspired me to make any additional changes toward simplicity and isn't one I'd recommend.
Posted by min hus at 3:28 PM 5 comments:

Email ThisBlogThis!Share to TwitterShare to FacebookShare to Pinterest
Labels: review

Yesterday I made a rare trip to the salon where, while chatting with my stylist, I found out the salon is open during regular hours on Christmas Eve and she had to work the whole day. She also only had one appointment for the entire day, but wouldn't be allowed to leave early regardless. Now my stylist wasn't complaining, I was asking the questions and she merely responded. But I think this is ridiculous.

When I was little, which wasn't so long ago, most businesses were closed on the major holidays of Christmas, Thanksgiving and New Year's Day. Today, more and more businesses are staying open on holidays for the "convenience" of their customers. Is this really progress? Has society really gotten to the point where we can't even take one entire day off? A day off from shopping, from eating out, from going to the movies, from getting our hair done. A day off from consuming.

When will we say enough is enough?

Can't we close all non-essential businesses (sorry doctors, police and firefighters) for one single day and let everyone, not just those in certain lucky positions, enjoy the holiday with their families? Or just have an extra day to spend as they want? And if this issue doesn't bother you, would you feel differently if you were someone who got stuck working every holiday?

I guarantee you that the world would be just fine if we all took a day off. The procrastinators would finish shopping on December 23. Those who refuse to cook would learn to heat up leftovers or make a sandwich. We would all survive and maybe, just maybe, we'd be a little happier, and a little more rested if we took a day or two off to relax.

When I lived in Norway, everyone knew the shops would close from noon on Saturday until Monday morning, so they planned accordingly. Few stores were open until late at night on weeknights. At the time I resented the lack of entertainment options at all hours, (what can I say, I was a teenager) but now I think it would make a refreshing change. Maybe our lives wouldn't revolve so much on rushing, doing, and consuming during those off hours. Maybe we would slow down and focus on the more important things in life.

Is such a change even possible?


Yes, but I doubt it will ever happen. In order to cause such a change we would need to work together to force businesses to close by not patronizing them during the holidays. Petitions aren't going to work in this case. Businesses respond to profits, or lack thereof. If customers stop patronizing them on holidays, and it become more expensive for them to stay open then to close, then and only then would they act differently. But sadly I don't have a lot of faith in this ever happening, because it seems like if a store is open someone will shop there.

Would you stop patronizing non-essential businesses on the holidays in order to give everyone time off?
Posted by min hus at 9:33 AM 5 comments:

It's a lovely 60F day in Ohio in early December, and I'm glad it's raining. Why? So I have an excuse not to spend most of the day sanding and painting cabinet doors, guilt free. When colleagues and friends ask what we did over the weekend and I reply, again, painting cabinets, their overwhelming response is, 'you're still painting cabinets?' Yes, yes we are, and we've still got a long way to go-- at least five more coats on some doors. ARGH! I just want the doors to be done and back in my kitchen already. 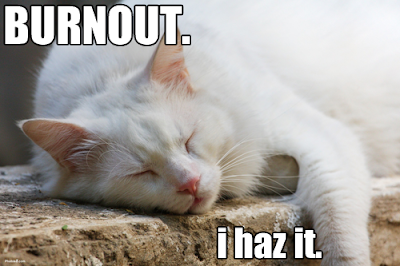 Of course I have no one to blame but myself. This is what happens when you start a painting project in fall that has to be done outside and you live in the northern hemisphere. With the short daylight hours and the late fall temps, we're only able to paint one coat per day if we're lucky.

We could be done by now if we'd (a) started earlier or (b) were willing to paint the doors with a brush or roller, which could easily be done indoors, anytime. I tried to brush and roll the doors, I really did. This is part of what made this project take so long. First I tried Benjamin Moore Advance paint, because I saw rave internet reviews about how well it self-levels while still being water-washable. I brushed it as carefully as possible, tried rolling it with three different kinds of mini-rollers (they don't call me a perfectionist for nothing), but we weren't that impressed with the results, especially not for the price.

Then we tried Cabinet Coat, which leveled much, much better. On a small area with a carefully applied brush  Cabinet Coat looked almost sprayed on. When dealing with an entire cabinet door we couldn't quite replicate those results, but it was still an improvement over the Advance. I figured the painting application issue was resolved and we started moving forward.

Then we had a chance to borrow and try an airless paint gun from friends. You can read more about that here, but basically, the airless spray-painted results were amazing, but so was the mess caused by the overspray. After seeing the smoothly-painted surface achieved by spraying, however, the idea of going back to brush marks was very unappealing. Luckily, the boyfriend was able to borrow an HVLP gun from work, and finally we had our answer.

In the meantime, while between borrowed paint guns one day, I tried a hybrid solution. I rolled on primer, which we could do inside before spraying the finish coats. That was a DISASTER. I used those little, white high-density foam rollers that other DIYers rave about. I must say, I don't get it. The results were just awful. Am I just super sensitive to the texture rollers cause or am I a rolling buffoon? I don't know, but the resulting texture on the doors resembled the peel of an orange and it took 80 grit sandpaper and an electric sander to get all that blasted texture off so we could re-spray them. If I wasn't able to spray paint the doors, I would brush them, no question. Those little white foam rollers are pure garbage.


So when it comes to painting cabinets, for best results, my solution is:

What's your recipe for painting success? And if you love those dastardly foam rollers, what's the secret to using them?!