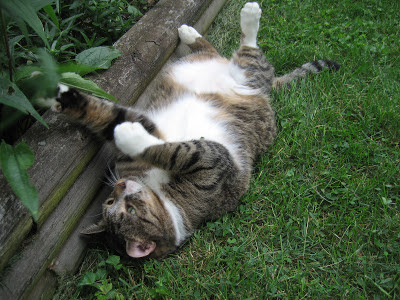 Making resolutions is a rare thing for me, and it's even more rare for me to do so around the new year. Thinking about what I want to accomplish for the next year is something I naturally do around my birthday instead. But there is something about the new year that makes is a good time to make a fresh start on being healthier, and so that's my big goal for 2013. Again. Getting healthier and finally finishing the freaking kitchen renovation, which has become rather embarrassing anytime anyone asks about it. The answer to that one is no, it's still not done, and yes, my kitchen cabinet doors are still sitting in the garage waiting for more spray-paint-friendly weather. To say I can't wait for spring is an understatement.

By setting only two big goals, I hope that it's easier to successfully accomplish both. But making a change to my usual routine and habits is never easy for me.

Now when I say I want to get healthier, what I really mean is, I want to lose some friggin' weight. And lots of it. Unfortunately this isn't my first rodeo. I've been unhappy with my weight for, oh, decades. When I was much younger, I wasn't actually overweight (looking back now I realize that at times I was darned skinny). Since college, however I've struggled to stay within my healthy weight range and have floated just above or under it.

The Problem
Why I'm currently overweight is no secret of course. I like to eat. A lot. Unfortunately, I also like to eat crap. A lot. I don't love to exercise and I hate, hate going to the gym. But for several months of the year that's of the best options I have to get a decent workout. I will never be one of those people who enjoys working out (bike rides in the great outdoors, yes, everything else, hell no). The feeling I get after a workout is superb. But before and during? It's always a struggle.

The Fix
How to lose the weight isn't a secret either. We all know the facts, eat less (and better), move more, repeat for the rest of your life. Doing that all the time, every single day, can be downright tricky however.

The first time I really, seriously stuck to a healthy diet and exercise routine was 2009. Starting January 1 that year I used the free tracking tools at sparkpeople.com, ate better, exercised 3-6 times per week (burning around 2000 calories) and lost 35 pounds. I was so proud of myself. I kept it off until 2011 and then begin the much quicker slide back up. I gained that 35 pounds right back plus another 18 for bad behavior. A new medication may have contributed to that, but once again I had gone back into my old routine of eating lots of crap and never exercising.

So now I'm trying again, hopefully for good this time. I started on January 9 and am down 7 pounds as of today. Overall that's not bad, but it feels slower this time. And harder. I know I can do it, but I also know it's going to take a long time and that I can never stop trying.

One of the many annoying things about trying to lose weight is that I find myself more obsessed about food than ever. I'm constantly thinking about what I can or can't eat. Or trying to fight off a craving. Or adding up how many calories I have left. Or thinking about the next meal and whether I have a few extra calories to indulge a little, or not. It's exhausting. But it is getting easier.