I've never been big on change just for change's sake. No, I'd much rather get things exactly as I like and have them stay that way. But the thing about gardens, houses, and, well, life, is that even if things seem quite perfect for the moment, they eventually change. Sometimes they change for the better, and sometimes not. And we have little choice but to adapt.

Last year was a big year of changes and I've been trying to adapt ever since. This long holiday weekend I continued on our efforts to get the garden back in order. Tiny steps you know.


From a distance it was still somewhat passable, but eventually I could no longer deny that the front yard needed some serious help. The white picket fence I'd once loved was in need of a good coat of paint, which I considered until finding out the wood was mostly rotten. And the purple barberry bushed were overgrown and dying. Not to mention their copious thorns which stuck me every time I tried to garden around them, no matter how thick my gloves or careful I was. 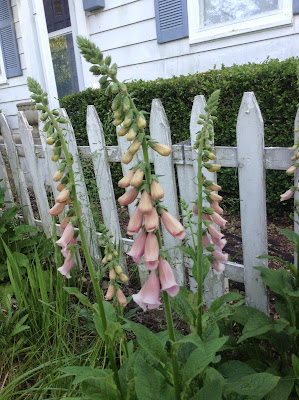 So early this spring the boyfriend pulled out the bushes with his truck (I guess there's a redneck side to all of us, but it was fast and it worked) and pulled out the fence. We loaded up the bushes in his truck and after a stressful drive where I fretted about us losing our precariously balanced load all over the road, we made it to the compost site and got rid of those suckers.

Then I weeded and weeded, and planned and shopped for something to replace the bushes with. The boyfriend campaigned for flowers only (no more pesky overgrown bush issues with those), while I thought we needed something bigger to fill the large gaps.

Thursday evening I went to the garden center and spent a lovely evening picking out two dwarf butterfly bushes, a baptisa smoke, three Veronica speedwell plants, lavender and an obedient plant. Then on Friday and Saturday I weeded some more, amended the soil, moved plants, planted new ones and mulched.

My body still aches from the effort, but finally it's finished and I'm pretty pleased with the result. 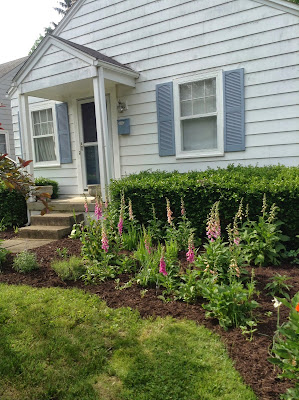 That's one small corner of life sorted. For now, at least.
Posted by min hus at 8:54 AM 5 comments: