No, this isn't turning into a deal blog, too many other people do that far better than I ever could, but in the interest of giving back, I wanted to share a deal I found today on Sun detergent at Kroger.

Laundry detergent is one of the things I really hate to buy, so I'm always on the lookout for the cheapest brand that does the job. Lately that's Sun. Today Kroger had Sun detergent on sale for $2.50/32 load bottle, plus there were "buy 2 get 1 free" coupons at the store. In addition I also had a coupon for $0.50 off a bottle of Sun detergent. After coupons, I spent $4.00 for three bottles of Sun laundry detergent, or just $1.33 each, versus the $3.49 each regular price.

If your store has the coupons this deal should be available at least through Sunday.
Posted by min hus at 11:53 AM 4 comments:

I'm not much of a Black Friday shopper. I don't like getting up at the crack of dawn, standing in line in the freezing cold, or dealing with all the rude shoppers. There is however one store that manages to get me to leave the house on Black Friday: CVS. While I didn't do quite as good as last year in terms of how much cash I spent, I did get more items we'll actually use and need. I spent around $11 and got $50 worth of items, plus I still have $7.88 in extra care bucks to spend at CVS.

Also, CVS still had plenty of stock on all their deals while I was out this morning, which was nice to see. If you're interested in scoring some deals, you have through Saturday to do so. Find coupon matchups at The Thrifty Mama.
Posted by min hus at 11:29 AM No comments: 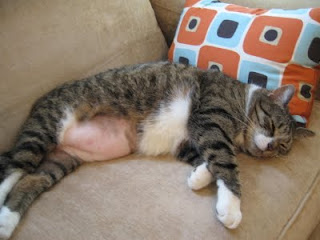 This adequately illustrates the current state of my decluttering efforts

Much like my recent blogging efforts, my decluttering efforts have seriously dwindled to, um, nothing though it might not look like it since I was decluttered way more than an item a day a few weeks ago. Part of this is due to time and focusing on other things right now, and part is due to pain levels since most, but not all of the easy stuff is already gone. Note that I didn't say it's because my house is decluttered, because although there's been some improvement, it decidedly is not.

I've been trying to figure out why it's so hard for me to let go of certain items of clutter. I'm not even talking about items that have sentimental value. So what am I talking about?
This is just a sample of course, there is much more stupid crap I'm still hanging on to. So how does one overcome this?
Obviously, I'm still struggling with this myself, so what tips do you have for me?
Posted by min hus at 6:09 AM 2 comments: