copyright: flickr user qnr
It wasn't long ago that the boy and I viewed shopping as a recreational activity. We spent many a weekend afternoon browsing at the mall or shopping center; Often buying things we didn't really need. We weren't shopaholics, or hoarders. In fact we looked like many other typical Americans. Shopping is almost encouraged as a national past time.
Eventually, I became sick of wasting so many hours shopping. More and more often I would refuse to spend the afternoon shopping. At first the boy resisted, but eventually he too was fine with the idea of shopping less.
Even though I cut down on shopping, and have never been a spendthrift, I was still buying more than I needed. When I decided to take make a concerted effort to stop buying items I didn't really need or really, really want and would use; I was nervous about going into a store. But you know what? It gets easier, much easier.
Friday night, I decided to brave the mall to get some needed heavy duty moisturizing shampoo. I was there for about 40 minutes and during that time I browsed four of my favorite stores. In that time you know what I was tempted to buy besides the shampoo I came for? Nothing. Not. One. Thing.
At this point in time, buying a bunch of crap I don't really need holds no appeal whatsoever. I even went to my favorite clothing store, but since I'd already gone though my closet and pulled out every piece of clothing I own, I knew I had more than enough clothing and didn't need to purchase more.
After trying to transition into using less toxic body products, the smells in my once beloved bath and body store were overpowering. I left after a few moments.
So if you're just starting on your journey to a less consumerist lifestyle, take heart. The longer you resist the pull of consumerism, the less of a hold it has on you. As I drove home from the mall, stuck in traffic, watched the crowds at the chain restaurants and thought about the shoppers laden with bags at the mall, I couldn't have been less tempted to be a part of any of that. I now prefer a less-consumerist life and am thankful I'm no longer one of the shopping zombies.
Posted by min hus at 8:00 AM 4 comments:

Last of the Flowers

Sadly, the time has come to say goodbye to this year's zinnias. I've been enjoying them since August (at least) and have become spoiled by being able to run outside and snip some blooms whenever the mood strikes. Not bad for a couple bucks worth of seeds that I planted outside in May, eh?

But alas, all good things must end and tonight we're expecting a hard frost. So tonight I made the rounds and liberated as many blooms as I could before darkness fell.

It's thrilling to see a full bouquet of flowers fresh from my own garden; I usually own snip a few at a time, never an entire vase-full. Maybe I should plant more next year so I can do this more often.

Au revoir until next year garden.
Posted by min hus at 4:46 PM 1 comment:

I just finished No Impact Man: The Adventures of a Guilty Liberal Who Attempts to Save the Planet, and the Discoveries He Makes About Himself and Our Way of Life in the Process, a book I was surprisingly engrossed in from beginning to end. Why do I say surprisingly? Well, after being a frequent reader of the No Impact Man blog, and watching the documentary, I didn't think there would be that much new content about the project that would keep my interest. Plus, at times I've found Colin's tone on the blog to be a bit grating, but I'm hyper-persnickety like that. The No Impact book, however, was a great read.

First, if you're expecting a step-by-step, nitty-gritty guide to the project, or details on what the Beavan's used instead of toilet paper during the experiment, you're going to be disappointed, because this isn't that kind of book. Yes, the basics of the project are explained, but the book, to me, was much more about the philosophy behind Beavan's environmental work. And somehow Colin manages to describe his philosophy in a way that doesn't sound so new-agey or preachy as to be a turn off, as other books I've read have.

Another plus, is that Beavan isn't too egotistical to admit his own faults and mistakes. He fully admits to judging other's "eco-sins" more harshly than he judges his own and works to correct that. He isn't afraid to point out his mistakes and "cheats" during the project.

Beavan delves into some of the problems behind the United States' current economy of consumption, if you want more detail on those issues, read the Story of Stuff by Annie Leonard. Like Leonard, Beavan also makes the point that it would be one thing of our over-consumption was actually making us happy, but it's not and it's killing the planet.

Beavan definitely examines our reliance on one-time use products and his family's efforts to eliminate them. This is definitely something I can improve upon, and will work to by:
I already eliminated bottled water, and bring coffee from home each day in a thermos.

I also like that Beavan includes not just his notes, but also a long list of interesting-sounding books, websites and other resources for more information, including several that are new to me.

This book definitely gave me some new ideas to think about. So, if you can't tell already, I'd give No Impact man a solid 4.75/5.0 rating and highly recommend it.
Posted by min hus at 6:50 PM 3 comments:

Duh Moments on My Green Journey

image credit: kerryvaugh
Do you ever have a realization that it so simple you can't believe it took you so long to discover it in the first place?
Case in point, despite the fact that we go through 35 cans of cat food a week, and despite the fact that I try to recycle as much as possible, I just starting recycling cat food cans yesterday. Yesterday! And I consider myself a somewhat intelligent person. At times. Although this is obviously not a good example of that.
What gives? Honestly I didn't even think about recycling cat food cans at first. Then, once I did I thought, they're so stinky, smelly and gross that recycling them would be way more of a pain than it was worth. You know how much of a pain it actually turned out to be? No pain whatsoever. When a can is empty I simply fill it with water and put it in the sink. After 15 minutes or whenever I'm in the kitchen next I dump the water out, do a 2 second rinse, and voila, a clean can. Why the heck have I been waiting so long to try that?
Although I have the best intentions of being more green, I think the biggest thing that trips me up is just accepting what I've always done in the past, or seen family do, as sacred. Throwing compost in a used coffee can under the sink felt cumbersome at first, but now it feels weird not to do it. Or when I finally tried drying clothes without dryer sheets, and discovered I didn't miss them. Oh, and when I never remembered to bring reusable bags to the store until I finally started keeping them in the trunk of my car instead of in the house. Or how about when I finally tried online banking and instantly loved how much faster it was to pay bills.
Yeah, so obviously I'm not so good with change (shut up, boyfriend!), but please tell me I'm not the only one who frequently has these duh moments? What other easy green tips might I be missing?
Posted by min hus at 4:49 PM 8 comments:

Why Did I Save That? 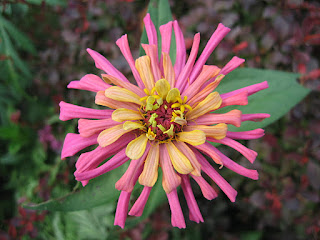 gratuitous shot of one o' my zinnias
Have you visited the 100 Things 100 Days blog? I love it, and am also completely jealous of Christine's ability to make each clutter clearing post entertaining. That is a gift! Then there's the fact that she counts each piece of clutter. I wish I'd done that and kept track of exactly how many items I've purged, though I doubt I'd ever make it to 10,000 even if I counted every single piece of paper purged. I tried to track this with the dearly decluttered list, but alas I lost the motivation to update it.
I keep trying to do what to me is a massive purge of 100 items in a single day, but find it pretty much impossible. Unless I attack two categories of my items that are still rather massive: paper and photos. So Sunday, after spending a few days away, I came home and did exactly that.
One area I've had a major breakthrough this year is sentimental clutter. I used to save every scrap of paper that reminded me of big trips, major milestones, etc. I had dozens of letters received while I was an exchange student, many of whom from my fellow exchange student friends I haven't spoken to since. When I read them again, which was rather boring, I couldn't remember why I'd ever kept them in the first place.
And photos, oh the photos. I used to keep two shoeboxes crammed full of extra photos in addition to the photo albums full, now I'm down to less than one shoebox, and I even decluttered one of the albums. It wasn't painful at all to toss the duplicates, the poor-quality shots, and the shots of people/places I don't feel the need to keep forever. Photos I wanted to keep but didn't necessarily need in paper form have been scanned before tossing.
Here's what I decluttered Sunday evening:
Posted by min hus at 3:10 PM No comments: