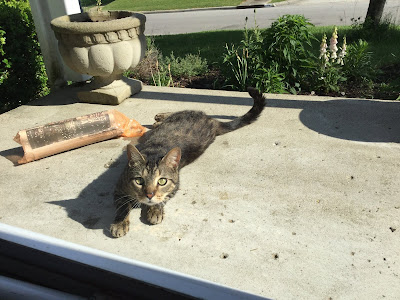 This is Garden Kitty, GC for short. He lives down the street, but spends most of his time outside.

He's extremely friendly and sweet, and seems to crave attention even more than food. So we gave him both.

I didn't know his real name, but started calling him Garden Kitty because he liked to keep me company while I gardened. He would hang out and occasionally come over to be pet or to pounce on something that moved enough to catch his attention. He loved to play and would chase sticks, or vines or even long plants. He was great company and made chore time more fun. Often he would be on the deck waiting for us first thing in the morning and would come back after we returned home from work.

He was extremely curious and before locking the garage up we had to make sure he wasn't still in there exploring. He had no fear. There was the time I went outside to scare away the deer that GC was slowly creeping up on as if he were going to pounce on it. Or the squirrel that he came *this close* to catching and instead swatted on the behind as it leaped away.

Sometimes he was a bit of a pain. Like when I was trying to hoeing weeds and he kept trying to rake against my hoe and pounce where I was working. I was afraid I would accidentally hurt him, so I stopped and petted him instead. Or when he camped out on our deck and stressed out our sensitive kitty, possibly contributing to his recent cystitis flare. Or when he scared away the birds from the feeder we hung from the deck to provide entertainment to our three indoor kitties.

But we couldn't be mad at GC. And we couldn't stick to our resolutions to ignore him. He was too sweet of a soul.

We debated if GC was neglected. He was outside most of the time. Early in the morning and late at night. Even on heat warning days when the temperature was 95 and so humid it felt like 105F. He was thin so when he cried for food we started feeding him. So did some of our other neighbors. One down the street called him Friendly Kitty, also an apt description.

Our next door neighbor worried that he wasn't good around cars. He didn't always look before crossing the street in his excitement to come visit. And unfortunately on Friday, August 2, this habit is what led to his far too-early death when he was hit by a car.

I know there can be extenuating circumstances that lead people to let their cats outside. But there are so many risks--cruel people, cars, other animals--and their lives tend to be so much shorter than indoor cats. I question if it's worth the risk considering the alternatives of letting them out only with supervision or on a leash or in a catio.

We miss him and mourn his early passing. I question if I should have done more for him. I know some of our other neighbors have the same thoughts. He deserved more than he was given at home, but he was loved by many.

Farewell GC, you were a very good boy. We won't forget you. 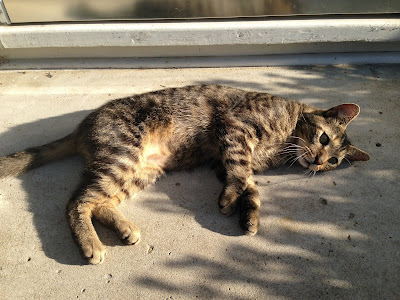