I hate everything about black Friday shopping: getting up early, the lines, the crowds, the rudeness, but today I finally had fun shopping on Black Friday at CVS. I started with $11.99 in extra care bucks, spent $1.39 for $60 worth of products and left with $15 in extra care bucks. Hello shoppers' high! I did go to three stores and did four transactions in total to manage this.

If you're new to CVS shopping and want to get in on all the action, learn more from one of the masters, Money Saving Mom. CVS 101 is a good place to start.
Posted by min hus at 4:08 PM 6 comments:

From Fugly to Fabulous: A Fireplace Makeover Story Finally I could stand it no longer, I had to do something about the hideousness that was my fireplace. I wouldn't paint just any brick fireplace, but this thing was the most hideously fugly red brick fireplace and required drastic action. Words can't even describe it, so I'd better just show you: I've been loathing this monstrosity for three years. But finally, after being inspired by so many great white fireplaces, I painted the brick (using primer and high gloss enamel) and sprayed the insert a cast-iron aluminum color. I even cleaned out the ash and leftover burnt wood from the firebox first, which was the part I dreaded most. I'll probably paint the mantle white too eventually, but I wanted to try it au natural for a while first. I'd still like to embellish it with a wood surround and new mantle someday, but for now, I'm pretty happy.

*Tip: Check the auto-supply store for an even wider range of colors that can withstand high heat than what you'll find at the home-improvement store.
Posted by min hus at 8:42 PM 7 comments:

Chocolate Chip Cookie Cake or Why I'm Not Martha

Yesterday the boy turned the big 3-0! I guess I should stop calling him the boy, since he's old now. Ha ha! Anywho, he mentioned a cake, but not just any cake, a chocolate chip cookie cake from the Great American Cookie Co. I really wasn't looking forward to a trip to the mall, but luckily I remembered that we had both chocolate chip cookie mix and icing (a rarity indeed). So I decided to whip up a homemade chocolate chip cookie cake. Despite the fact that I'd never tried one before and have an uncanny knack for cooking disasters. Luckily it doesn't get much easier then using a mix, plopping it in a 9" pan and baking until done (around 25 minutes I believe). As you can see, cake decorating is not my thing. First I don't have actual tools, so I used a plastic baggie instead, which sprung a leak. I was also impatient and started icing before the cake completely cooled, the icing looked much better before it melted. Honest. 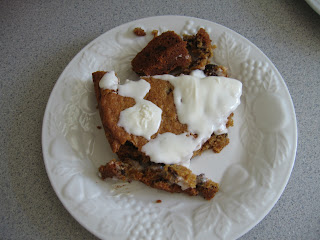 But despite how it looked, the cake tasted quite good I think. Very rich of course. The boy was rather unimpressed, however, and wants the real thing next year. There's just no pleasing some people. It's a good thing I took pics when I did though, cause this cookie cake is history. Guess it must have been tasty afterall.
Posted by min hus at 6:19 PM No comments: 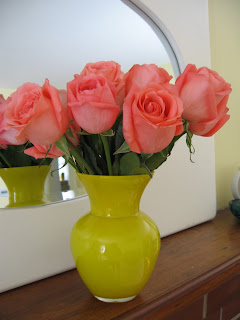 Ah freedom! I have the next nine days off work. That time stretches before me and seems full of endless possibilities. Everywhere I turn I find more projects to add to my to-do list:
It seems almost doable, except that tomorrow is the boy's birthday and I have a very important, top secret project that will take up the rest of the next day and a half. I also promised my mom I'd help her clean her house before the relatives arrive. Then we'll be tied up for Thanksgiving and some of Black Friday. So that leaves maybe four days for projects. I'm hoping that by posting my to-do list I'll be more likely to finish some of it!
Posted by min hus at 6:18 PM 3 comments:

You Know It's Freezing When... Even the kitties won't come out from under the covers. It's turned pretty chilly here. And it snowed already. Just a dusting but still, I'm not ready. I mean look, I haven't even raked the leaves yet. The darned to-do list just keeps growing.
Posted by min hus at 6:34 PM 2 comments:

I'm trying to help my mom rid her house of some massive auction clutter in time for Thanksgiving by loading up our Etsy shop as much as possible over the next few weeks. But now I'm having my own problems letting go of some of these vintage treasures. I mean who knew having tons of vintage costume jewelry to choose from could make getting ready for work so much more fun? It's like a whole new world has opened up to me. 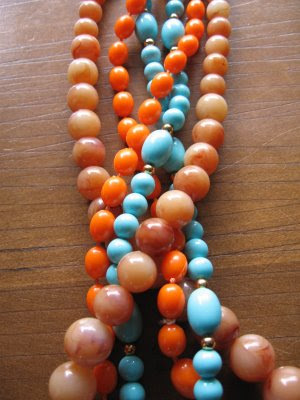 Sorry Etsy, these necklaces are stayin' with me!
But that's not to say I'm keeping all the good stuff. I have managed to part with great finds too, which are available now at Two Cs in the Attic. 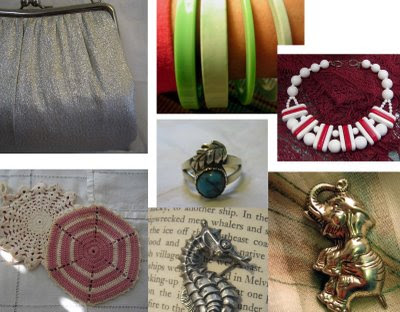 And even if this stuff doesn't tempt you, you're bound to find something to lust after at Etsy.
Posted by min hus at 11:58 AM 1 comment: 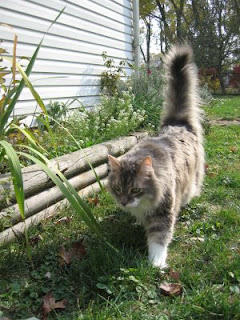 My garden helper and I took a stroll through the garden today on this lovely Indian summer weekend. Even though we've had a couple frosts, including a hard frost or two, a few tough perennials haven't given up for the year yet. 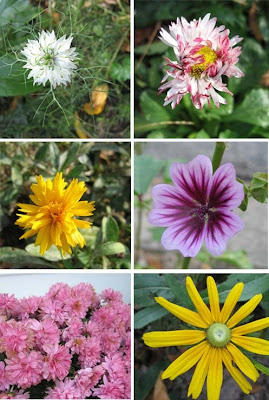